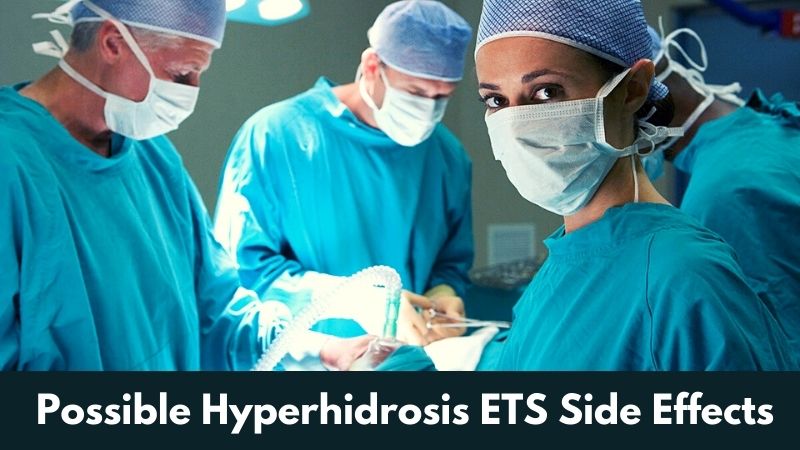 Side effects are a direct consequence of the surgery, in addition to the expected results of the intervention. ETS side effects can be minimal, moderate and serious that reduce the beneficial effect of the operation.

Compensatory or reflex sweating (compensatory hyperhidrosis) is the most serious ETS side effect. ETS, in addition to stopping blushing, will also reduce sweating in the face, head and palms. For unknown reasons, all patients notice a slight increase in sweating in other parts of the body, especially in the chest, back, abdomen, and thighs. Increased sweating can be expressed in minimal changes and up to severe sweating, which is an independent problem. In about 5% of cases, increased sweating may be a more significant problem than blushing syndrome itself. There is an opinion that the likelihood of a pronounced compensatory hyperhidrosis is higher in men who are obese and already note increased body sweating. However, this is a group prognosis and it is effective impossible to to predict who will develop compensatory hyperhidrosis.

In case of severe compensatory hyperhidrosis, we recommend removing the clips, preferably in the first 1-2 months after surgery. We emphasize that although there are reports of successful reversion of the operation results, there is no rigorous scientific evidence of reversion by removing clips.

There have also been reports of the successful use of nerve insertion (leg nerve grafting or intercostal nerve use) for reversal purposes. There is no rigorous scientific evidence of the effectiveness of reversion using a neural insertion.

If you agree to do it for facial blushing, you automatically accept the small chance of developing irreversible compensatory hyperhidrosis.

Gustatory sweating is excessive sweating on the face caused by certain odors or tastes of food and drinks. This is a rather rare condition, and its exact cause is unknown. Gustatory sweating is considered a ETS side effect. It is noted in no more than 10% of patients and practically does not cause anxiety for patients. Some help can be provided by drugs with anticholinergic action and local use of Botox. Surgeons have not come across a situation where thickening sweats created a serious problem, but if this occurs, it is theoretically justified to remove the clips. As we emphasized earlier, there is no scientific evidence of clip-on reversion.

Hands will be very dry after ETS. This can be a problem in some cases, particularly when handling paper, and may require the use of moisturizers. In addition, the palms are hot immediately after the operation, although this effect lasts for about 6 months. After this, the palms become the same as before the operation and sometimes cold.

Changes in the cardiovascular system

Sympathectomy is accompanied by well-documented changes in the cardiovascular system. The heart rate decreases slightly, which in turn is compensated by an increase in the stroke volume. The vast majority of patients do not notice changes in any way. However, there are isolated reports that professional athletes are deprived of the opportunity to show ultra-high results. If you are a professional athlete, you should seriously discuss this with your surgeon. It should be noted that this effect of the operation is less pronounced with clipping than with the previously used sympathectomy T2-T4. Some reduction in blood pressure is also possible, but this is generally regarded as a boon.

Paresthesias in the head area

Reported ETS side effects that are difficult to relate to surgery

A huge number of side effects are attributed to sympathectomy usually by patients who have not received the desired result or who have other side effects of the operation.

These side effects include apathy, hair loss, decreased libido, fatigue, pain in various parts of the body.

We will never deny the potential connection of these manifestations with the operation, although we consider the greater importance of the psychological factor and accidental coincidence in such cases since there is no reasonable physiological explanation for these manifestations after the surgery.